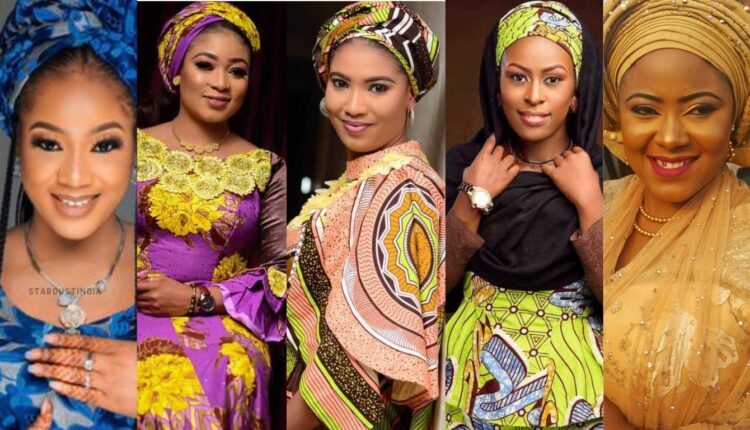 10 Hottest Actresses Of Kannywood: Kannywood, Nigeria’s film industry, has produced several women who compete with their Hollywood counterparts in appearance, abilities, and fame. Kannywood produces films in the Hausa language, which is hardly recognized outside of Nigeria, although the appeal of Nigerian women has crossed borders. They are well-known on social media, and millions of people follow them.

Before they joined social media, Nigerian actresses were hardly known outside of Kannywood. While Hausa films may have fewer takes throughout the world, Kannywood actresses have become social media icons. It is not an exaggeration to claim that people have begun watching Hausa movies to see their favorite women.

Jamila Umar Nagudu is a popular actress in the Hausa film industry, also known as Kannywood. She has appeared in numerous films and is known for her acting skills and beauty. Nagudu began her acting career in the early 2000s and has since become a household name in the Kannywood industry. Considering her performance in Hausa movies, she’s called the ‘Queen of Kannywood’. She has won several awards for her performances and has been recognized as one of the most talented actresses in the industry.

Rahama Sadau is a Nigerian actress, singer, and film producer known for her work in the Hausa film industry, also known as Kannywood. She began her acting career in 2010 and quickly rose to fame with her performances in several critically acclaimed films. Sadau is considered one of the most talented and successful actresses in the Kannywood industry, with a large following both in Nigeria and abroad. In 2016, she was banned by the Motion Picture Practitioners Association of Nigeria (MOPPAN) from appearing in Kannywood films, due to her appearance in a music video that was deemed to be inappropriate. However, the ban was lifted in 2017 and Sadau returned to the Kannywood industry.

Rahama Hassan is one of the rare actresses that requires a minimal introduction. She was born in Kogi State but has spent the majority of her life in Minna, Niger State, Nigeria. She is a producer, makeup artist, and entrepreneur. She wears many hats because she started early. And, based on her performance, it would not be an exaggeration to describe her a natural actress. She has left her imprint on every film in which she has appeared. Furthermore, people have begun to recognize the Kannywood film business as a professional industry as a result of the hard work of some of the actresses, notably Rahama Hassan.

Zainab Indomie is a Nigerian actress and model who is known for her work in the Hausa film industry, also known as Kannywood. She began her acting career in 2011 and has since appeared in several films and television series. She is considered one of the most talented and successful actresses in the Kannywood industry.

In addition to her acting career, Zainab Indomie is also known for her philanthropy and activism. She is an advocate for the education of girls and women and has worked with several organizations to promote girls’ education and empowerment in Nigeria.

Hadiza Aliyu is a Nigerian actress, well known for her work in the Hausa film industry, Kannywood. She began her acting career in the early 2010s and quickly rose to fame with her performances in several critically acclaimed films.

She is considered one of the most talented and successful actresses in the Kannywood industry and has won several awards and recognition for her performances. Hadiza Aliyu is also known for her philanthropy and activism, she is an advocate for women’s rights and children’s education in Nigeria.

Nafisat Abdullahi began her acting career in the late 2000s in the Hausa film industry, Kannywood. she has since appeared in several films and television series.

Nafisat Abdullahi is considered one of the most talented and successful actresses in the Kannywood industry. She has won several awards and recognition for her performances and is known for her ability to portray a wide range of characters in her films. In addition to her acting career, Nafisat Abdullahi is also known for her philanthropy and activism, she is an advocate for children’s right and education in Nigeria.

Maryam Booth is most recognised for her part in the 2020 film The Milkmaid, which represented Nigeria in the Academy Awards’ best foreign feature category. For this film, Maryam Booth won the Africa Movie Academy Award for Best Actress in a Supporting Role. Her performance as “Zainab” was appreciated by everybody, including film reviewers. She is a rising celebrity since she began performing at the age of five and has been in the media spotlight ever since.

Samira Ahmad is a prominent Kannywood actress. She is, nonetheless, a successful businesswoman and interior designer. Samira Ahmad joined Kannywood in 2005 and quickly ascended the success ladder. She has a significant fan base in the film business as well as on social media. Viewers and reviewers alike laud her appearance and performance in the films in which she has appeared. She left the field after marrying Tanimu Yahuza Shaban, a fellow Kennywood actor. Her supporters, though, recall her performance.

Hafsat Shehu is from Ogun State’s Shagamu community. She debuted in Kannywood in 2015 with the film Barauniya. And the film was a big success. Hafsat Shehu achieved success with her debut film as well. Soon after, she began receiving proposals from top filmmakers and producers such as Ali Nuhu and Sani Danja. She has demonstrated her talent in several films and also has a production firm, Ramlat Investment Film. She also works in the textile industry.

Safiya Musa was the youngest in a family of 36 children. She is the 34th child of Hajiya Handiza Musa, an ex-military man. Her mother was a Mali nurse. She graduated from Kaduna State Polytechnic with a certificate in Mass Communication. However, she was more interested in modeling and acting, so she moved her concentration from media to cinema and went on to have a successful career in Kannywood.