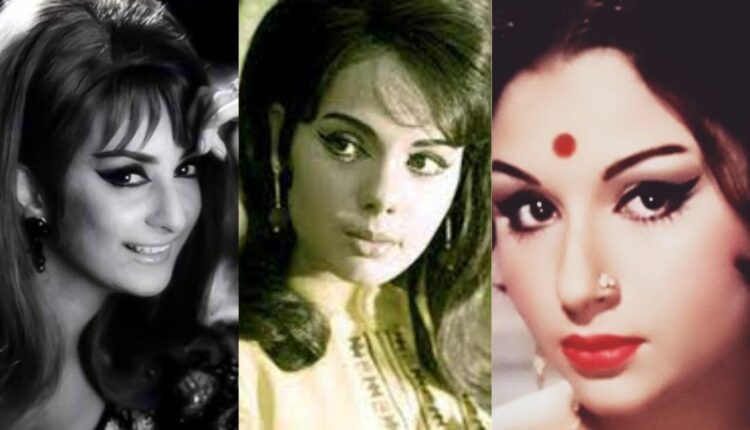 Indian Bollywood Fashion in 1960s: In the 1960s, Bollywood (the Hindi-language film industry based in Mumbai, India) saw a shift towards more colorful and extravagant costumes, with a focus on traditional Indian designs and fabrics. Female actresses often wore sarees, lehengas, and Anarkali suits, while male actors sported traditional Indian attire such as kurta pajamas and sherwanis. The fashion trends in Bollywood during this era also featured a lot of beaded jewelry and headbands. Hair and makeup were also heavily influenced by the retro style of the time.

Check out 1960s Fashion Trends of Bollywood! They wore everything from polka dots to ruffled sleeves!

Top Most Stylish Actresses in Bollywood in 1960s

These actresses were known for their impeccable sense of style and elegance on and off screen. They were considered fashion icons of their time and were often seen wearing traditional Indian attire such as sarees, lehengas, and salwar kameez. They also had a preference for traditional Indian jewelry such as jhumkas, maang tikka, and bangles. Their fashion sense was heavily influenced by Indian traditional wear, and they continue to be remembered as some of the most stylish actresses in Bollywood history.

In 1960s Sadhana’s made her figure-hugging suit style famous suit The ‘Sadhana Cut’ became a fashion cult in India. In her debut film “Love in Shimla” in the ’60s her style made her famous overnight. Lots of young girls around that era inspired  with her style and suddenly everybody was spotted with bangs.In 1965 Yash Chopra’s directed film “ Waqt” she became favourite with the fashionista’s body-hugging suits.

Mumtaz’s sari in the 1965 movie Ram Aur Shyam is iconic. She made her draped sari style popular for all the time. You may not want to replicate the same look since it is outdated, but you may create your own variety. To add some punch to your outfit, keep it ruffled at the bottom and wrap it a bit smaller about your knees and waist. You may also go for a more natural look instead of caking up your face with layers of foundation. This season, experiment with strobing. It will give you a natural appearance while yet allowing your skin to breathe.

Hema Malini and her passion for polka dots We recall Hema Malini in wacky polka dot shirts, and while the cuts are no longer popular but the style remain same in trends. Pair a polka dot shirt with a high-waisted pencil skirt or vice versa to add some dots to your outfit. Just be sure to choose smaller prints. Bigger prints will simply make you appear odd, and they look best on stage.

In the film “Jab Jab Phool Khile” Nanda wore tea dresses and crop tops with fitted pencil skirts. She made her style icon with this outfit.The actress epitomised tea dresses and gowns, and it’s worth drawing inspiration from her. In the film, the actress may be seen wearing brooches with her tea gowns to lend a beautiful touch. That’s shrewd dressing. Also, we saw her wearing crop tops even back then, and she did them justice. She demonstrated how to wear clothing even if you are curvy.

Sharmila Tagore’s beehive hairstyle and wing-liner Sharmila Tagore’s name became linked with the winged eyeliner, despite the fact that other celebrities used it around the same period. Maybe, it was just the flawless technique in which she defined her eyes that won her the label of ‘the queen of dramatic eye make-up’. But it wasn’t simply this make-up technique that she was good at. The beehive haircut also grew popular among women and ruled the fashion charts until the late 1980s. It may appear a little over-the-top at the moment, but you can simply tone it down to your liking.