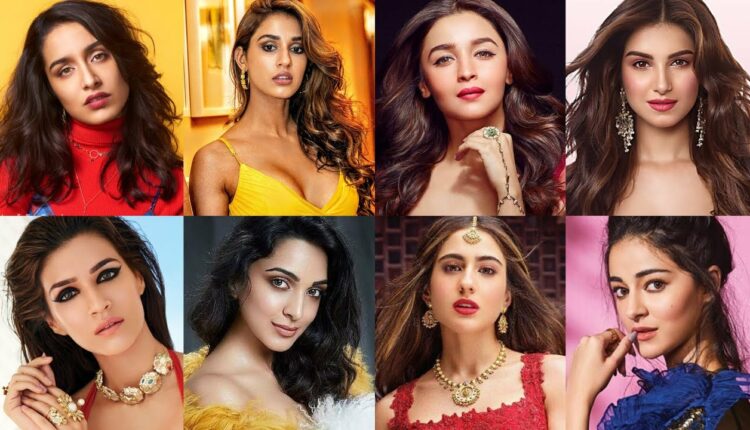 Either it’s Hollywood, Bollywood, Tollywood or any other industry, ever since the introduction of films, women are played an important role. Bollywood is the second largest film industry in the world, after Hollywood. With their talent, beauty and intelligence, many actresses have played extraordinary characters and are shining all over the world! This blog will be about the top 10 best female actresses in India.

21st century film industries are considered for the most beautiful women in the world – that’s what we’re going to talk about today. Beauty is one thing in Indian women and our actresses are essence of grace and beauty.

Today, we’ll be discussing the beautiful actresses in India and touching on some of their personal and professional lives. It can be hard to pick just ten actresses from this group, but we’ve gone ahead and tried! From Alia to Shraddha to Katrina… Who do you think is the most beautiful actress in India? Let’s take a look!

Kirti Sanon entered the world of Bollywood with the movie “ Heropanti” alongside the handsome hunk, Tiger Shroff. It’s definitely a well-known fact that Kriti was previously involved in engineering. But did you know that before she landed her first break in Bollywood, she already did some TV commercials where she truly discovered her love for acting? Known for being beautiful on the inside as well as out, Kriti inspires modern women to let go of their inhibitions and pursue their dreams.

Ananya Pandey is one of the most recent celebrities who are making a name for herself by signing lucrative deals and marketing their products brilliantly. Daughter of Chunky Pandey, She began her acting career in 2019 with roles in the teen film Student of the Year 2 and the comedy Pati Patni Aur Woh. These performances earned her the Filmfare Award for Best Female Debut.

You might be knowing  that Ananya was chosen to debut at the elite Parisian a prestigious event ‘Le Bal’ Gala. This prestigious event is attended by privileged families those who wants to introduce their daughters, aged 16-25 years, into society. It’s a tradition of sorts that the royal, aristocrats, and business tycoons follow. Ananya’s cuteness and fashionable style has made her a popular choice among the youth.

This Aashiqui girl is no stranger to doing outstanding roles. She’s come a long way from being the debutant in Teen Patti and doing films like Stree, Ek Villain, Baaghi 3, and others. Don’t let her girl-next-door features fool you. She’s a tremendously talented star who deserves the spotlight. Shraddha Kapoor was last seen in the movie Saaho opposite south’s superstar, Prabhas.

Daughter of veteran actor, Shakti Kapoor, Shraddha is a half-Punjabi and half-Maharashtrian with her father being Punjabi and mother being a Maharashtrian. If you’re a tea lover, you and Shraddha definitely have something in common! And where food is concerned, she is quite fond of Japanese cuisine.

An army kid, an entrepreneur, an amazing actress and a beautiful human, Anushka Sharma, is most definitely one of the most beautiful actress in India. She is one of the most popular and highest-paid actors in India. She stepped into Bollywood with her thin eyebrows, radiant skin and her trademark smile. Over the years, she has transformed herself and is now one of the prettiest Indian actresses we know of!

A little over a decade in the industry, Anushka made her debut opposite Shah Rukh Khan in Rab Ne Bana Di Jodi. And by 2015, she made a landmark in her career as she turned a producer with NH10. With the perfect combination of skin tone and doll eyes, Anushka turned all glam in 2014 when she cut her hair short. An instant freshness to our eyes and her look, this makeover inspired her to try more styles and trends on herself which were complimenting her to the core. From soft curls to top knots, from boss lady buns to slicked-back hair, she’s done it all!

Model and actress Kriti Kharbanda are recognized as one of the modern era’s most beautiful Indian ladies. She began her cinematic career with the Telugu flick Boni after having success in modeling. She then participated in a number of Tamil, Kannada, and Telugu films. Kriti made her Bollywood debut in 2017 with the film Guest in London.

In Bollywood films like ‘Yamla Pagla Deewana: Phir Se’, ‘Housefull 4’, and ‘Pagalpanti’, Kriti Kharbanda has played some outstanding and unforgettable parts. She has also worked in several Tamil and Telugu movies.

Jacqueline Fernandez’s enchanting beauty and amazing appearance help her rank among the most attractive Bollywood actors. In 2006, Jacqueline, who was born in Bahrain’s capital city of Manama, was named Miss Universe Sri Lanka.

Among her honors are the International Indian Film Academy (IIFA) Award for Best Female Debut in Aladin (2010), nomination for the IIFA Award for Best Supporting Actress in Race 2, and the Stardust Award for Style Icon of the Year in Kick (2014).

The gorgeous and beautiful Deepika Padukone indeed is a heartthrob to many in Bollywood and the globe. She acted in Bollywood and Hollywood movies and is known for her smile and natural acting phenomena. Her groundbreaking performances in Padmavat, Bajirao Mastani, Piku, and Om Shanti Om will consistently be recognized. Deepika is beautiful outside and inside; she is well-known for her philanthropy and efforts to spread advocate awareness on mental health through her foundation.

In addition to being a stunning Bollywood actress, Shruti Haasan is also regarded as one of the sexiest Tamil actresses. She is a well-known Tollywood and Bollywood actress who also excels as a singer and musician.

She is the daughter of Kamal Haasan, one of the most well-known actors. She was born in Chennai, India. Her Bollywood career began in 2009 with the release of the film ‘Luck’. Her most recent Bollywood productions are ‘Ramaiya Vastavaiya’, ‘D-day’, and ‘Gabbar Is Back’.

The next in the list of the most beautiful actress in India is Miss World 2000. Priyanka Chopra has come a long way since coming into the limelight. From being just a pretty face to empowering girls and motivating women, worldwide, Priyanka Chopra is an idol we must look up to. Over the years, Priyanka’s style, makeup and personality has transformed and helped her talent reach the western world. Now married to Nick Jonas, Priyanka Chopra Jonas can sing, dance, act and what not!

She works hard, not just for herself, but for others as well. Priyanka is known to introduce and give new talent a chance in her own production house, Purple Pebble Pictures. Located in Mumbai, she gives special attention to regional films and has produced several pathbreaking, including The White Tiger. She’s created history when she became the first Indian girl to feature on ‘Guess’. Not just an actor-entrepreneur, Priyanka is also a philanthropist. She’s a UN Goodwill Ambassador and has founded The Priyanka Chopra Foundation for Health and Education.

We’re seeing new faces entering the world of Bollywood quite regularly but as of 2022, these are the most gorgeous faces we have in the industry. And to sum it up, the most beautiful actress in India are currently ruling the charts and winning our hearts!