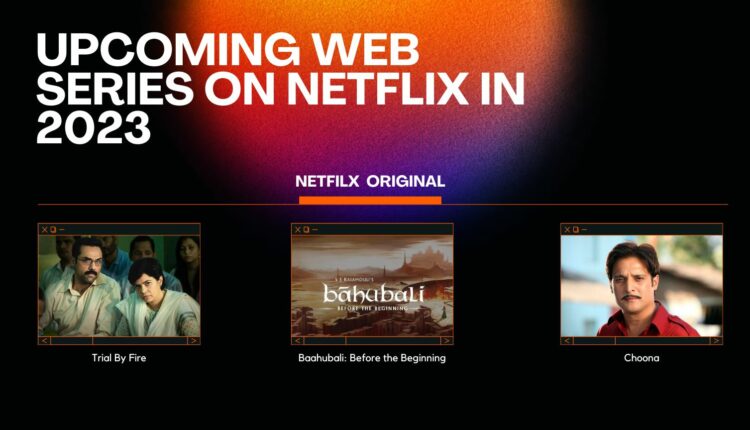 Netflix regularly releases new series, seasons, and episodes of existing series. Welcome to an early preview at the Netflix Originals that will be available on Netflix India in February 2023. There is lots of series and Movies linedup this year and beyond. The month’s new releases include big blockbusters like Your Place or Mine and the return of famous programmes like You.

There’s a lot coming in 2023, so make sure to check out our previews of all the January 2023 Netflix Originals, as well as our bigger 2023 previews of new movies and series. Here we have listed  the Indian Original series and movies we hope to see in 2023 or beyond:

Baahubali: Before the Beginning

Baahubali: Before the Beginning: Baahubali maker has announced the prequel series of ‘Baahubali’ film franchise. The series is directed by Deva Katta and Praveen Sattaru. It is set to explore the story of young Shivudu and the beginning of the Mahishmati Kingdom. The series is written by Anand Neelakantan and produced by Arka Media Works. However, in a recent  report by a media portal claimed that the making of the series has been shelved but a source close to the development dismisses such rumour.

Reportedly,Wamiqa Gabbi is getting ready to play the role of Sivagami, in the prequel series to SS Rajmouli’s ‘Baahubali’ film franchise.

Choona actor Jimmy Shergill told The Indian Express during the last summer that he expected the comic heist series centred in the environment of Uttar Pradesh politics to premiere on Netflix in 2022. That didn’t happen, but the programme appears to be almost set to go. The wait for Choona will end soon.

A fire at a South Delhi movie theatre in 1997 killed 59 people and wounded 100 more. Trial By Fire is based on the book of the same name written by Neelam and Shekhar Krishnamoorthy, who lost two children in the fire. Prashant Nair’s non-linear technique is used to portray the tale of the parents’ search of justice in the decades following the tragedy. Trial By Fire will premiere on Netflix on January 13, 2023.

Finally, the Excel Entertainment series Dabba Cartel seems to be moving forward. According to PeepingMoon, Shonali Bose has been hired to helm the drama, which Variety described as “a narrative of five women who operate a high stakes hidden cartel,” with Shabana Azmi signed on to play one of the key characters. Because filming has yet to begin, a 2023 release date is doubtful, but we’ll keep our fingers crossed.

The comic thriller Guns & Gulaabs is the first result of a multi-year relationship between Raj & DK and Netflix. According to Netflix-the new series starring Rajkummar Rao, Dulquer Salmaan and Adarsh Gourav completed filming in April. “Inspired by the world’s misfits, Guns & Gulaabs is a narrative about love and innocence set in a criminal environment. The series is planned to merge the romanticism of the 1990s with a criminal thriller while seamlessly intertwining comedy.”

Sanjay Leela Bhansali never does anything halfway, thus Heeramandi, his debut streaming series, has everyone’s attention. Every casting rumour gets press coverage (will Rekha appear on the show? Mumtaz? Fardeen Khan? ), with a trustworthy source identifying Richa Chadha, Aditi Rao Hydari, Manisha Koirala, and Sonakshi Sinha as the show’s starring females. Bhansali’s story of courtesans in pre-independence Lahore is sure to be extravagant, with pricey sets and intricate dance sequences. This one has piqued our interest.

Though Netflix hasn’t confirmed it, a second edition of the anthology Lust Stories is in the works.Bombay Talkies, Lust Stories, and Ghost Stories were the previous three parts in the franchise, and they all contained short films directed by Anurag Kashyap, Zoya Akhtar, Dibakar Banerjee, and Karan Johar. Those filmmakers have left, and four new directors have taken their place.

Mindscapes, a collection of 10 short tales by famous writer M.T. Vasudevan Nair, is also in the works. Netflix’s initial Malayalam anthology has Mammootty in a movie directed by Lijo Jose Pellissery and Mohanlal in a remake of the 1970 classic Olavum Theeravum directed by Priyadarshan.

The official Indian version of Showtime’s murder series Ray Donovan, starring real-life nephew and uncle Rana and Venkatesh Daggubati, is all set to release .   Netflix India said on Twitter that filming completed at the end of May, and the streamer released a teaser video for the series during its Tudum event in September.